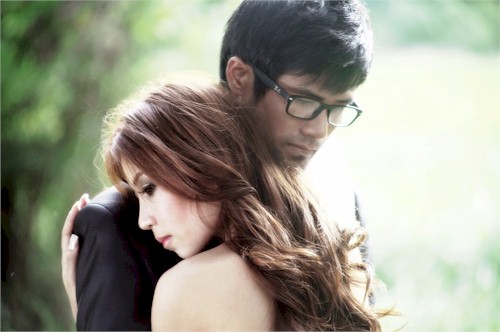 I met a girl once who had almost given up on the idea of real intimacy.

Everyone she asked told her “That only exists in stories.”

“You’re crazy wanting more than just sex from your partner.”

Like it really didn’t matter to him whether he was having sex with her or someone else.

But always the answer was the same.

“You’re crazy! Does he sleep with other girls? He’s just a good guy who wants sex with his partner. Quit being so cold!”

But she knew it wasn’t true.

There had to be a reason he never wanted to touch her or kiss her, without his agenda really being just to “get off.”

“You’re the one who wants to live in a fantasy world and won’t accept reality the way other girls do.”

“Quit being so cold!”

Then she thought, “Okay. If he needs sex and I need affection, it’s only fair we meet each other’s needs right?”

But he told her he couldn’t fake affection.

He had to be who he was.

And she realized that was fair.

But it applied to her too.

She couldn’t fake sex with a guy who didn’t really love her either.

But all the psychologists, psychotherapists, and counselors kept telling her she was crazy.

So she still doubted whether it was all her fault.

Maybe she just wanted way too much.

Maybe she was actually the one ruining their relationship.

But then she learned about how most guys are naturally sexually addicted.

That we are biologically wired to want a regular sexual release.

Getting this monkey off our back isn’t easy.

It definitely never happens unless we become more sexually self aware.

This is when the lights went on for her.

When she came into his life he just found himself a less “shameful” way to get off instead.

She realized she WAS being used.

She didn’t think there was any way to help him see this, but at least she lost the guilt.

She knew she wasn’t crazy.

If what I’ve described sounds like you and your partner, don’t give up hope. You’re not crazy!

I work with couples struggling with exactly these issues.

I know how to help guys move toward greater affection with their partners too.

Because I was that emotionally unavailable guy…but I changed.

You can have a rich love life where your partner values you for who you are.

Who wants to share himself with you “just because.”

Instead of using each other to get your needs met, you’ll want to give yourselves to each other freely.

The love you desire CAN be yours.

Reach out to me NOW and I’ll guide you back to love!

What do you think? Are you crazy to think a guy could really love you too?

Without It Having To Lead To Anything More

Are You And Your Partner Just Friends?