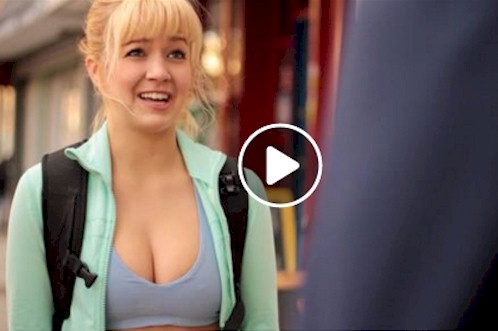 A female relationship coach Facebook friend started a conversation the other day.

It was based on a youtube video whose image is shown above.

It’s a humorous look at the fact guys love breasts.

But my coach friend admitted if she’s totally honest?

She naturally finds herself staring at “boobies” too.

She thinks they are delicious!

Of course I immediately chimed in saying, “I’m an ‘ass man’ myself but sure, I enjoy a nice display of cleavage.” Then I added a link to the Cool Girl post, where I encourage you girls not to sexually shame your guy.

Unsurprisingly a number of other guys commented too.

One guy said, “I’m an old dude but it never gets old.”

Still another, “Till the day they put me in the ground. It’s in our DNA!”

Then the girls started commenting.

“Well…he did have a great explanation.”

“I totally do the same thing.”

An obviously deeper thinking girl said, “I don’t define my sexuality with categories but yeah I do stare at boobs and butts. Just like I look at people’s faces and how they walk. They’re just beautiful and humans are interesting.”

“They are beautiful indeed. A wonderful part of God’s creation.”

Another girl said, “It’s the symmetry…bikini models are beautiful.”

“They motivate me to work out more and read more about health and nutrition.”

The whole experience was enjoyable for all.

Then SHE showed up to make her contribution.

Since the #metoo movement?

It is all but inevitable.

These days a politically correct feminist has to share her thoughts.

As I’m sure you guessed, “share her thoughts” is an understatment.

And true to form she demonstrated for all to see the subjective inconsistencies that make “sexual harassment” a meaningless category.

At that time she even thought it was IMPORTANT.

But now she sees it’s not.

She thinks it’s okay if her date checks her out.

But if it’s someone she doesn’t know or has no romantic interest in? Then she will definitely be a “bitch” about it.

You need to get more confident.

Stop hitting on her with your eyes.

Look from afar it you must but definitely not during conversation.

That is rude and your “narcissistic attention deficiency” is definitely not an excuse.

You win the prize!

“Sexual harassment” is only sexual harassment if I don’t happen to be interested in you. Otherwise I just see it as sexual interest and I LIKE it because I’m into you.

I’ll be the first to insist it’s not cool to stare.

But is that what this guy in the video was doing?

He hardly glanced and the girl flipped out.

Guys expressing interest in you is not sexual harassment. Since you don’t mind it when you’re attracted you know this is true.

Like is said in Part 1, “sexual harassment is vaporware.”

You’re being sold something that doesn’t exist.

Time to catch on and quit letting it fool you.

What do you think? Is a guy checking out your assets really doing you any harm or is it time you take the compliment for what it is and simply enjoy that your beauty is being appreciated?

It’s Not You It’s Them