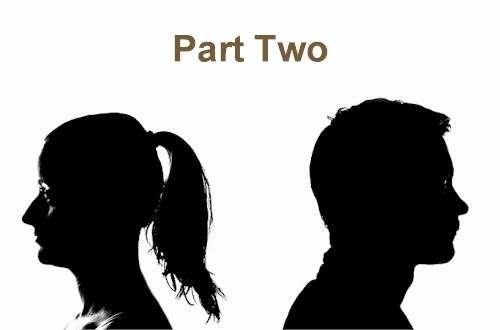 I had some very interesting responses both online and offline to last week’s post called The Point Of No Return.

Not surprisingly the replies were from various girls who felt I was not understanding them and needing some correcting.

I love feedback and as I’ve said before I’m not here to develop a bunch of “yes man” (“yes woman” in this case) responses.

I’m here to get you to think.

I love it when you express your contrary opinions.

I hope over time conversations about these important subjects will open up more and more here.

But I’ve come to conclude that I didn’t really communicate my meaning very well in that post.

I say this because of the almost universal impression these girls took away from it.

They thought I was talking about the reasons people use to break up with their partners.

Either that or the criteria people use for what they want in a partner in the first place.

There are a lot of reasons people use to break up of course.

And both guys and girls do this as one commenter said.

She said guys often say they’re breaking up because they feel “disrespected, unappreciated, emasculated, wounded or they just ‘fall out of love.”

Girls of course break up for their own reasons too.

One Facebook commenter said a deal breaker would be the inability to be “compassionate, respectful, and value other people’s humanity.”

But that comment really slides into the other reason these girls took me to be meaning.

The question of partner criteria.

This one is a big subject. You girls and your lists of criteria.

I know guys do this a little bit too but nowhere near to the extent you do.

The main reason I discourage the use of such lists is that it puts your criteria ahead of romantic love.

The more you do this the more you guarantee you won’t find real love and when you think you’ve found it eventually it will fade away on you.

The reason is you’re putting your criteria list ahead of romantic love in your life.

Romantic love must be your priority. If you don’t prioritize romantic love it will slowly depart in deference to your preference.

These are all important subjects but the fact that last blog post was taken the way it was?

I think it was Kyle Cease who said once that the proof I have communicated is that you actually understood what I said.

If you didn’t the problem lies with me.

So let me try again.

When I speak of the point of no return that girls I’ve dated have almost universally mentioned?

What they were talking about was neither breakup justifications or partner criteria.

The point of no return has to do with emotional wounding.

It is when a guy does something in the relationship that is so emotionally devastating?

To the girl in question in her heart of hearts she believes there is absolutely no coming back from it.

No possibility of reconciliation and restoration of emotional connection in the relationship.

He has simply gone too far.

Past the point of no return.

What these girls are really expressing is that there is a point where they simply cannot forgive.

Forgiveness is the key to relationship happiness where harms and wounds have happened. There is no path back but forgiveness once that has happened. If you are unable to forgive how can you return to connection again?

I won’t expand on this subject here but I will say this in no uncertain terms.

There is no such thing as an impossibility to forgive.

There is only an UNWILLINGNESS to do so.

If you find yourself unable to forgive the problem lies with you.

What I have heard over and over again from girls – never from guys – is that they can reach a point emotionally where they simply cannot forgive.

This is scary to a guy.

Because he doesn’t think this way.

He may be unwilling at times to forgive but he knows what he’s doing.

Not in my experience anyway.

But to commit to someone capable of believing there is a point where he could go TOO FAR some day and there is nothing he could ever do to make it right? Because she believes she couldn’t come back from it? Yikes!

That is what I meant in the previous post.

And it is almost universally expressed by the girls I’ve dated.

What do you think? Is there a place your partner could go where you think you simply could not forgive?

A Tale Of Three Girlfriends

Romantic Friendships Are The Relationship Option For the 21st Century

Have You Been A Victim Of The Foodie Call?