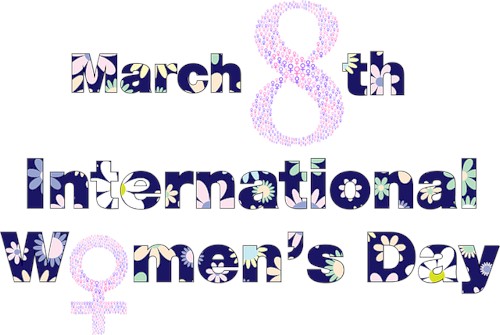 This is a special edition blog post inspired by yesterday’s event.

As you probably know March 8 was International Women’s Day.

This is a day we take time around the world to recognize what the girls in our lives mean to us.

So I decided to do that too.

I have to admit though, until I moved to Vancouver two years ago and started dating again, I didn’t have a lot of international girls in my life.

But as I began sending messages yesterday to all my sweethearts from countries other than Canada and the US, I realized how much things have changed.

(Sorry to my Canadian and US sweethearts in Vancouver, Manitoba, New Jersey, and other places across the continent. It doesn’t mean I wasn’t thinking about you too!)

The first girl I met when I arrived in Vancouver and we experienced an instant connection. Literally. Within 30 seconds we were joking and teasing and having fun together!

She’ll always have a special place in my heart. She was my first love after leaving my long term relationship.

One girl I met in a business context and she helped me network here a bit. Nothing romantic, just a special friend.

The third girl I met because I saw her picture on a Meetup group and decided to private message her. I told her I knew this might seem random but I thought she had a pretty smile and wondered if she’d be game to meet.

We had several dates over several weeks and though she couldn’t quite see herself with a polyamorous guy, we remain friends to this day. She and I have interesting philosophical discussions!

The fourth girl I met on the Skytrain one day riding back home from Delta. We shared a wonderful evening over drinks and French pastries. I think she might have decided I was a bit too old for her, as she passed on my further invites.

Too bad! I found her a very mature girl and know she would have been wonderful to form a connection with. I would do so now if she was game.

My fifth Persian friend met me at a meetup one evening and we had a lovely visit together after that too and stay in touch off and on. We share an interest in teaching English as a second language.

The sixth girl I met through business and we also had a nice evening over French pastries one night shortly after we met. We’ve stayed friends and touch base here and there.

I will never forget my German honey.

I met her at the same meetup I met that fourth Persian girl. If she hadn’t returned to Europe, I would have pursued her with some passion. She’s a lovely girl who once again wrapped herself around my heart!

When are you moving to Vancouver???

I have several Slavic sweethearts too.

It always makes me a bit sad that these girls are so monogamy oriented. They really do a number on me!

The first girl I met the summer after I came to Vancouver and I spent two and half hours visiting with her over coffee.

I told my friend who introduced us that I had not had that much pleasure in the company of a girl for a long, long time.

She and I met up a few times and still keep in touch. We are just friends but if she was willing, we’d be lovers too. The offer is still on the plate at my end!

Another Slavic sweetheart is from Ukraine and I first met her through an international dating site. I found out she’s a local girl now and have tried to meet up with her several times. I messaged with her after a ManTalks event on dating and relationships.

I was so moved when she told me she believed you should “conquer your lover’s heart over again with each sunset and each sunrise!”

Such a pure Slavic heart in her! Here too my offer remains.

I have met up with a couple other girls from that international dating site though.

One girl I spent nine wonderful days getting to know in Southern California and the other was staying here in Coquitlam for a few months and we had the chance to enjoy each other’s company on several occasions too.

One Russian girl I messaged has been a joy to come to know. She teaches Latin dance if you can believe it! What is humorous is I private messaged her once through the Meetup site like I did the one Persian gal I’ve mentioned.

She seemed to think I was a too old for her too.  I wonder what she thinks now she’s met me! I’ve enjoyed her skill in conveying such illustrious skills to someone so very unversed in the art of dance!

Two other of my Slavic girlfriends are relationship coaches. I enjoy my interactions with them on this level as I joust with them about how to best approach the world of love!

Another Slavic girl I met when I decided to check out a speed dating event in Vancouver. I’m always exploring what people are doing in the world of relationships and it had been recommended to me so I went one night to scout the territory!

This girl really surprised me when I sat down at the table to chat with her, and she asked me if I was aware of the style of love making I recommend. How is that for first speed date conversation?

I have a Romanian honey I met through Facebook.

I’ve tried a few times to get together with her in person too and she keeps telling me it’s going to happen. Guess I’ll have to keep holding my breath and see!

I also have some sweethearts who are Indian.

The first girl I met through Match.com. We’ve had many wonderful visits together and I can honestly say she has a deep place of love in my heart.

I would explore a romantic connection with her in a moment, if she decided she wanted to as well. She is a wonderful, intelligent, mature girl and I love her and admire her for the changes she’s made in her life.

Another Indian girlfriend lives in the UK. I was introduced to her by this first Indian girl. She also is a wonderful person who I experienced an immediate connection with.

She was all absorbed with a relationship she had going at the time we met or I’m sure something more than “just friends” could have developed.

I met a third Indian girl again riding back into Vancouver on the train. We got chatting and kidding around. She was heading into town for a course that night.

I offered to catch her for a seawall walk sometime but so far she hasn’t taken me up on that either. Maybe this summer?

Another Indian girl has been a friend on the financial front, showing me some tricks in the stock investment world. She has a good and generous heart and I’ve enjoyed interacting with her on this level.

And then there are my Asian sweethearts.

One of these girls I spent a year trying to figure out the best way to meet her. She is friends with two of my other international girlfriends and I didn’t want to create any awkwardness in their relationships.

I finally got to meet her this year and expressed my clear interest in exploring something deeper. She didn’t share my initial feelings.

Too bad. I think if she’d taken a bit more time to get to know me, she might have felt different. But alas. That’s how love goes!

Another girl I met last year is Philipino. We met through my friend’s church. I can say without a doubt I fell like a rock for this girl and I’m pretty sure she felt the same way too.

Despite our immediate, powerful chemistry though, it was not to be.

Other factors come into play sometimes and there’s not much you can do about it when they do. But here too my offer remains, if she ever decides she’d like to pick up where we left off!

I met a wonderful Japanese girl taking dancing lessons. We had a great evening out one night and I learned a lot about Japan.

Silly me. I didn’t realize Japan has several islands to it. Guess I never paid much attention in geography class! We stay in touch off and on still.

Another couple of girlfriends are from China and I met them when I attended some workshops in Vegas this summer. They both are sweet and unique in their own ways and I enjoy their colorful characters.

I’m surprised I don’t have more hispanic girls in my life.

Because I certainly consider them beautiful.

But the one hispanic girl I have in my life makes up for all the rest. She is bar none the most fascinating, intelligent, sensitive girl I’ve met on my journeys.

I ended up definitively in the friend zone with her because I got to know her while she was working through another relationship.

Completely the wrong tactic according to your pickup artists “dating coaches!”

But I’m a long game guy, so I still hold out to her the possibility of more.

And given my pattern with girls, I’m not too concerned this makes me any kind of average frustrated chump (AFC)!

And last but definitely not least is my sweetheart who lives in Turkey.

She first reached out to me through an expat website I signed up to, on the recommendation of my hispanic sweetheart.

This girl and I have had many wonderful back and forths using WhatsApp. She is special to me too!

As a former dating coach of mine once said, “I love them all!”

No I haven’t had a romantic relationship with all of these girls.

Not because I wasn’t willing.

Sure, some of them I’ve had no romantic feelings for.

But others I definitely have, and would explore that kind of connection with them, if they were open to that too.

But as I said in my post on polyamory, what I do is simply keep myself open to love and explore with each girl I meet what kind of connection will develop between us.

I’m not an “out for sex” guy so I don’t have the “luxury” of hooking them into me emotionally by heading that way quickly.

While that does “work,” it is an addictive pattern I don’t recommend.

As another blogger who has influenced my thought says:

“I also prefer to connect with women who appreciate an honest and open approach, so I like to filter for that first. I’d rather not connect physically with women who don’t want to assume any responsibility for their choices; I tend to regard such women as too immature for my tastes.

“I see no need to adopt a physically aggressive posture up front and try to push women into doing things they aren’t ready to consciously choose. If, however, I’ve already had a deep conversation with a woman about what she wants to explore, and if she welcomes physical assertiveness, then I’m happy to do that with her. I certainly enjoy this when the woman is willing.”

No, all of the girls I’ve mentioned haven’t chosen to pursue a deeper connection with me.

I value each of these girls for who she is and for the value she adds to my life.

I love you all!

Thank you for being a part of my life!

The International Girls In My Life (Part 2)

How The 5 Love Languages Completely Miss The Point

So Let’s See How Romantic Friendships Size Up