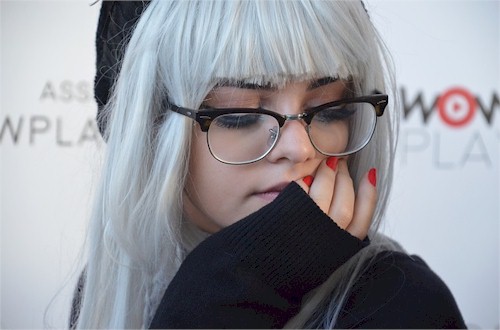 I was about half way down West 4th Ave when I saw her.

The girl with the silver hair.

I was out at the Kitsalano street festival last summer taking in the sights.

Of course there were bands playing and booths galore.

When I saw her I was captivated. I knew I had to talk to her and tell her how beautiful she was.

So I sauntered up to her booth while she was talking to someone else.

When she finally finished with them I just walked right up to her and came right out and said it.

She smiled and thanked me and I went on my way.

I didn’t even stop to talk.

I guess I was too taken by her and found myself quite tongue tied.

Which if you know me doesn’t quite make sense because I always have something to say.

That part I seem to come by naturally.

Or at least the learned behavior has become quite natural now.

You can learn this stuff guys!

Later on in the day I realized who foolish I’d been. Here I was expressing genuine attraction and I did absolutely nothing with it.

So as the sun was starting to wane a bit, I wandered back down the street toward her booth.

When I got there I saw she was surrounded by a lot of big boys.

She seemed to be quite into them too.

Even a couple cops who were playing quite friendly with her.

The usual started going through my mind.

“One of them is probably her boyfriend.”

“I would have to talk to her in front of all of them and how will they react?”

So I did nothing.

I just couldn’t bring myself to push through all that emotional noise.

I often wonder what would have happened if I’d gathered the courage to try.

I don’t beat myself up about these kinds of experiences.

There are plenty of fish in the sea.

And besides I did a great thing by initially just approaching her and expressing how I felt.

I would never have done that in the “good old days.” So I pat myself on the back for every gutsy thing I achieve.

But I definitely wouldn’t have minded finding out what made this one tick.

And I think of her off an on even now, the girl with the silver hair.

Maybe fate will bring me back in touch with you again.

That’s a pile of fantasy guys! The time to act is now while she’s in your sights. Just do it!

Why You’re Really Being Friend Zoned