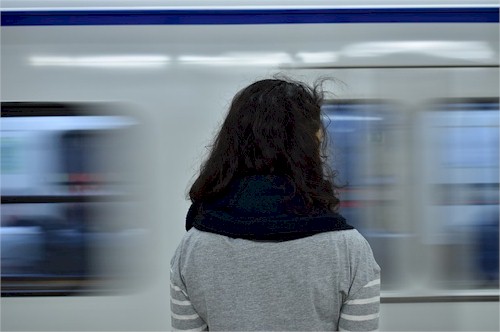 I was on the Skytrain the other day, Vancouver’s light rail transit system.

I like riding the train. It is a lifestyle choice for me.

I did a trip to Europe in 2012, saw how those folks lived, and figured they were doing something right.

As often is the case when I ride the train, my attention was focused on my phone as I was reading yet another relationship oriented book using my Kindle app.

This one was a fascinating one by an Evangelical Christian presenting what he believes to be the biblical basis for a polyamorous lifestyle.

Nobody can accuse me of dull reading!

As I sat there taking in this book while making my way to my home stop in Yaletown, a bit older girl and her younger friend boarded the train a few stops before my destination.

The older girl sat down beside me and her younger friend stood beside her in the aisle.

I heard the older girl say something but at first I didn’t really notice what she said because I was focused on my book.

Slowly though her words sunk into my psyche and I realized what she had said was this: “I guess the age of chivalry is dead.”

At first it didn’t dawn on me she was complaining that I didn’t get up and offer my seat so her younger friend could sit down too.

I found this encounter completely amusing though.

I thought how a lot of today’s “whipped puppy” guys might have jumped up and surrendered their seat, submitting to the chastisement they had received.

Of course I did nothing of the sort.

I saw nothing in the situation to suggest the younger girl was incapable of standing where she was for a few stops.

What I found the most funny though is that I hadn’t even noticed the two, until this statement finally sunk in.

I was focused on the book I was reading.

That’s not my normal pattern.

I often seek to strike up conversations with those around me.

But today I was engrossed.

So by the time I was even capable of doing anything about the situation had I wanted to, I had already been tried, judged, and sentenced.

For not getting up and offering a girl in her late teens or early twenties a seat!

Like she was going to suffer standing on the train for a few minutes.

I found myself wondering why, if this somewhat older girl was so worried about her younger friend needing to stand, she didn’t get up herself and offer her friend the seat she had so eagerly claimed beside me.

But of course, need had nothing to do with her judgment of me.

She was simply pronouncing a sentence of deeply embedded societal programming.

One that insists for some odd reason that “real men” open doors for women.

They put girls first in every way they can.

The programming assumes girls should be treated like little princesses worthy of honor and obeisance.

In Vancouver this kind of thought morphes into a more “spiritual” form.

It proclaims that girls are “goddesses” that guys have the privilege of worshipping.

I found myself wanting to check the date showing on my phone to make sure I hadn’t time warped back to the days of Lancelot and Guenevere in Camelot!

I love you girls.

I love doing this kind of thing because as I said, I love you.

But I don’t do any of this because it is expected of me. Or because I feel I would be doing anything wrong not to do so.

And sometimes I just don’t do so too.

It certainly would have been a wrong move to do so once this judgment had been expressed.

Yes if I see an elderly person who genuinely needs my seat, I will offer it to them.

And I’ll hold the door open for a guy too, if I’m so inclined.

I’m sorry if this all sounds too unromantic to you girls. I know you really want to be swept off your feet.

But as I’ve said before that is a bit of an addiction you have that can get in the way of real love in your life.

The central problem this whole story shows us is how expectations can get in the way of finding what you’re really after.

This older girl didn’t know me.

She didn’t know what I’m like as a person.

She made a judgment of me that had absolutely nothing to do with who I actually am.

It was based on a momentary behavior she completely misinterpretted.

I wasn’t being non-chivalrous. I didn’t even notice her and her friend until the offending event was well past happening, and she was expressing her disdain.

How many times do you make this kind of mistake with your partner?

Or when you’re first meeting a potential partner?

So they don’t behave according to what your fantasy of a partner or potential partner says they should.

Is that a reason to write them off or take no time to actually get to know them?

Wow have I seen a lot of this kind of pre-judgment on the dating scene.

Hey, if that’s how you want to do things it’s certainly your choice.

Just know though that you’ll be missing out on getting to know some of the most beautiful people that way.

So is the age of chivalry dead, or are you just living in your own medieval fantasy world?

The Best Time To Leave Your Relationship Is Now

So Let’s See How Romantic Friendships Size Up (Part 6)

So Let’s See How Romantic Friendships Size Up (Part 4)