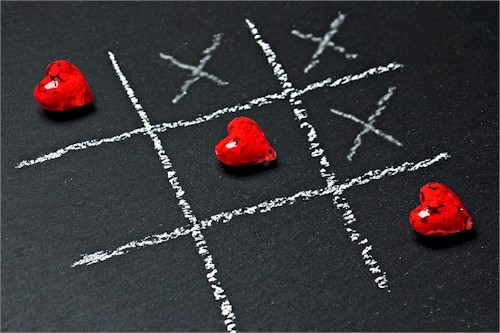 She said this because we were getting very close and she didn’t want things to go further.

Not because she didn’t want things to go further mind you.

She actually really cared about me and admitted later she was on an emotional roller coaster ride. But to let things go further would have been to violate her relationship ideology…monogamy.

And heaven knows you can’t do that!

Because that’s more important than the actual connection you’re experiencing with a person right?

I know I’m a paradigm assailer.

I’m prepared to accept the consequences.

What I want in my life now are Romantic Friendships with girls who share my desire for closeness and affection, without needing to tack on all the non-essentials that normally kill this kind of connection.

The central non-essential is of course monogamy.

Shortly after this experience, I published my post explaining how monogamy is a completely failed paradigm.

This girl read that post and sent me a very interesting question.

She asked, “Is monogamy defined as a commitment to one person for life, or while you are with that person?

And there it is.

The creative change up that our modern world has made to the dying concept of monogamy, to try to keep it alive.

Even while the life blood is slowly draining…

Eventually I’ll be sharing some interesting reading I’ve been doing on the history of marriage.

You’re going to be surprised by what that history shows.

It was only “tacked on” to marriage in the last 200 years.

My reply to this girl’s question was this:

“Technically monogamy is one person for life but people do refer to being with a single person at a time as monogamy too. That is known as serial monogamy – one partner after another – and is what normally ends up practiced either unintentionally by people who think they are partnering for life, or by people consciously expecting their love to end eventually.”

I pointed out to her this could just as easily be called serial polyamory, since it entails multiple partners too.

Just one partner after another in series instead of in parallel.

This girl told me she didn’t like being referred to as a serial monogamist because the word serial carries negative connotations that she didn’t enjoy being labeled with.

I told her that is the official term in the “literature.”

A quick Internet surf found her confirming this.

Recognizing it was a label she would have to own.

This girl is not the only person I’ve chatted with about serial monogamy.

When I first began to explore Romantic Friendships as a better way to pursue romantic love in my life, I was chatting with another long time friend and she reacted very strongly against polyamory too.

She told me “If I was with a guy and found out he was polyamorous, that would be the end of it for me.”

Is she a believer in long term monogamy?

She’s had a few failed marriages and has concluded that is out.

But she still believes in monogamy.

She doesn’t enter a relationship expecting it to last. She just enters it to experience what she experiences with the person and as long as they both believe they are benefiting from the relationship it will continue.

Not too much to complain about there.

And actually this girl at least so far is carrying out her latest relationship in the way I recommend you do monogamy, if you insist on that paradigm for your love life.

She and her partner “live apart together” and enjoy both the separateness and togetherness that can help romantic love thrive.

She has made some noises that eventually she and her partner may move in together.

I would definitely recommend against that.

But right now she seems to be enjoying a romantic friendship much like I recommend you pursue in your love life.

The only difference between this friend and myself is her insistence on monogamy.

I’ve explored in the past how your emotional insecurities impact your choice of relationship style. I admitted there that as long as monogamy is something both partners choose and neither partner insists on, that is a valid emotionally secure basis for monogamy.

Someone polyamorous in the way I define it could be monogamous that way.

What I have not been able to identify though, is any non-insecure reason to insist on monogamy from your partner.

Which is what a serial monogamist does.

How does she attempt to justify this insistence?

This second girl says if you are not monogamous with your partner you cannot go to the depth that is possible in monogamy.

Even the girl I mentioned earlier told me when she gets into a relationship she is “all in.”

So being in multiple relationships at once would not work for her.

When I told that first girl I am quite capable of loving more than one girl at the same time she told me “You can compartmentalize that. I can’t.”

I don’t really see this as compartmentalizing.

I just see it as loving who I love.

I don’t have any problem loving more than one person.

Humorously neither of these girls has only one friendship either.

Each of them finds herself quite capable of having emotionally connective relationships with many other people without any problem at all.

It is only in their romantic relationships that these girls insist this is not possible.

That is an answer that is never forthcoming.

It is usually the girls who are insisting this is so.

Most guys I talk to could see being polyamorous quite easily.

Of course since most guys are naturally sexually addicted this makes them more potentially promiscious.

But I’m not talking about “just sex” here.

So I don’t think this is about that male capacity to compartmentalize.

Here’s why I say this.

When I talk with you girls you almost all admit that you actually need to seek out relationships beyond your romantic partner.

Because no one partner is able to meet all your emotional needs.

That is why I recommend Romantic Friendships.

You can appreciate each person with whom you connect for who they are.

You don’t have to require them to be all the other things they’ll never be.

A lot of you girls agree with me here, but you still draw the line at romance. But could this be why your romantic loves keep ending?

Could it be why you keep getting stuck in the endless trap of serial monogamy?

Of course your biological wiring tells you to find your “one and only.”

I’m not denying that at all.

But that’s just nature’s plan to get babies born.

It doesn’t have anything to do with your long term relationship interests.

In fact nature’s plan is that you break up eventually so you can do it all over again.

Romantic love dies when we put it in a cage and insist it stay within its bars.

Romantic love thrives when it is set free to fly.

I believe serial monogamy is the last great modern hold out.

It is in the way of experiencing true romantic love in its fullness.

It is the death throws of traditional long term monogamy.

What do you think? Isn’t it time you just finally let it die?

Is Love The Answer To Your Loneliness?

“Just Friends” Is No Different Than “Just Sex” (Part 2)

All The Ways Living Together Harms Your Relationship