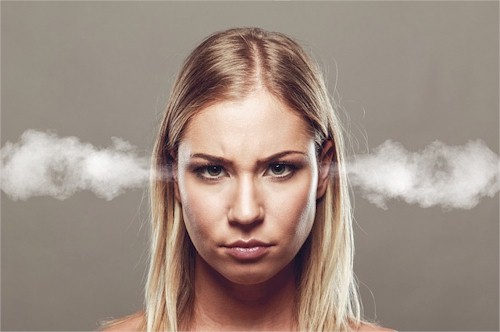 This entry is part 1 of 3 in the series Resting Bitch Face: It's The Law!

I recently published a post called Guys Are Predators Until Proven Innocent.

It’s all about the assumption you girls make.

What assumption is that?

That every guy near you is a potential threat.

I also published a Part 2 to that post, where one of you confirmed just what I said.

Because you’ve had some bad experiences?

Every guy must now be treated cold.

What I didn’t realize though, is this general strategy of yours actually has a much more specific and “rational” source.

I live in Vancouver.

The joke is that Yaletown consist of single girls with dogs.

Though they are looking to find a guy?

The girls here shoot themselves in the foot.

They are deliberately as unapproachable as they can be.

The primary stategy to put guys off?

It’s known as “resting bitch face,” or RBF for short.

Now before you get all worked up, and think I’m going all sexist here, I have to clarify. my natural mode is RBF too.

I’m a deep thinking type, who spends more time in his mind.

I spend less time out there in the world, with the rest of you.

When I’m thinking about things?

My face takes a rest.

It settles right down into a scowl.

I have to actually consciously offset this.

That is, if i want to appear more personable.

I was at a meetup a few weeks back.

We were discussing gender issues.

I was at the table with a feminist guy.

The most feminist of the girls told us explictly.

The Vancouver police are to blame.

They actually TEACH you girls to do an RBF scowl.

It’s a way to prevent guys from approaching you.

Now I’m all for avoiding eye contact, and blanking out on people who seem untoward in some way. There is no need to invite trouble from obvious potential sources.

It’s really not a great strategy though.

Not if you actually WANT to meet someone.

If you are hoping for the potential for something more?

I think you’ll see what I mean.

What’s interesting is, I just read an article by Kezia Noble. She is a female pickup trainer, who teaches guys how to approach and get with girls.

Guys are having more success approaching girls in person again.

It seems the whole online thing?

It’s not paying off for girls really wanting to date.

So they are becoming more receptive.

They are letting guys approach them in the daytime and nighttime in person.

What this suggests girls, is if you are actually WANTING to meet someone, now is also the time you should reevaluate your RBF strategy quite carefully.

You may be shooting yourself in the foot.

Preventing yourself from meeting the guy of your dreams.

But open up and be approachable if he looks okay.

He “could” still be a problem.

But the probabilities of that are quite slim.

The guys who look good are still your best bet.

What do you think? Is it time to consider shifting that RBF strategy you’ve been using, and start giving guys a chance again?

Appreciate Her Beauty Don’t Leer Down Her Top