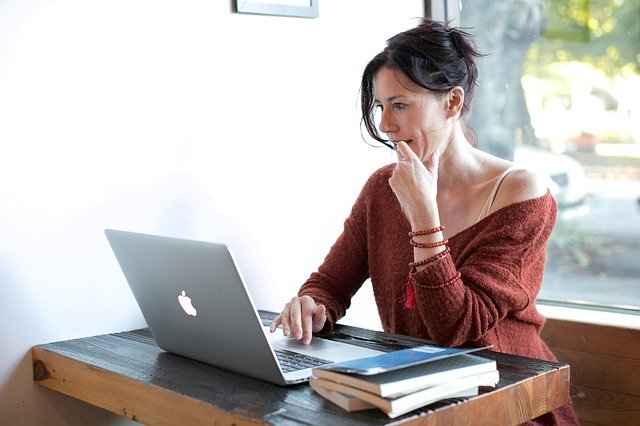 Part One and Part Two were about my perceived age experiment.

I decided not to publish my actual age on the online dating sites.

I published the age girls in real life tend to PERCEIVE me to be instead.

Yes…that’s quite a bit younger.

As I shared with you, I’ve had a couple of girls feel my doing this is lying. How could I try to start a relationship predicated on a falsehood instead of up front telling the truth?

I’ll leave you to review those first two entries to see what you think of my philosophical musings.

Suffice it to say I don’t perceive what I did as lying AT ALL.

What I want to do today though, is discuss another such online dating “gray area” with you.

It was about an online dating ethical adventure of her own.

She saw a job offer looking for writers for a company that helps you with your online dating. What they do is write your profile for you so you have a better fighting chance.

When my friend saw this she thought it sounded good.

Until she filled out the application that is.

When she did she saw this company also writes your back and forth messages too.

The ones between your potential dates and you?

So not only will your date encounter “them” when they first read your profile.

They will also encounter “them” when first getting to “know” you.

My friend decided this was unethical.

She backed out from completing the application.

What followed was as predictable as anything in this field can be. Her comment feed began to fill up with girl after girl thinking this company’s practices are completely terrible.

“What if they chatted for a couple weeks and got emotions stirred up?”

“A person could feel confused and taken advantage of!”

“I have major trust issues and online dating just makes it worse.”

“Even with someone writing you, people often lie.”

My friend gave all this the best response and one you should take to heart as well. She said, “This is why you should not get yourself emotionally involved with someone you haven’t met yet.”

When she said this she meant because of services like these.

But this should really be a no brainer anyway.

With the anonymity of the Internet, people can BE whoever they choose.

But is it really LYING what this service is helping people do?

My friend feels writing your profile is okay.

But writing your messages is CROSSING THE LINE.

My reply to this was, “Interesting. I don’t find that so unethical. Coaches coach people with their messages all the time. The early messaging is just a stepping stone to help someone get the chance to meet in person so the real dating can begin.”

She replied, “The other person should know.”

“They would probably be super turned off if they knew.”

“Unless a guy is completely up-front as soon as they meet.”

“Then maybe it would be okay.”

My mind was flashing back to Part One.

How completely turned off my date was when she met me.

When she found out I was much older than my profile said?

She thought I had LIED and THAT WAS THAT.

I replied further, “Could be we’re thinking quite differently here. I average two or three back and forths and then I pitch the meetup. I don’t string things out usually by chatting with a girl.”

Again she replied, “That’s better than a week or two.”

“But still deceptive in my estimation.”

“Would you then tell the woman you hired a writer for those messages?”

“It would be interesting to see the ratio.”

“How many men versus women would think this is okay or not okay?”

Again I replied, “I would put a lot more weight on the dishonesty scale (which I also don’t) for having an ENTIRE PROFILE written than having a COUPLE SHORT MESSAGES written.”

“Interesting. I’d put it the oppostie.”

“I also wouldn’t have trouble telling someone I hired a writer to help with my profile.”

“I don’t know how well received it would be my private messages were written by someone else.”

I said, “Yep. Varying sensitivities all around. But when it comes to online dating, only in person meeting carries genuine weight. I can actually imagine guys seeing a girl getting uptight about this as a good filtering system too!”

“I think it is about ethical compatibility.” she said.

“I wouldn’t label someone as uptight (or dishonest).”

But of course the whole discussion was predicated on a person’s DISHONESTY for doing just this.

Most guys would INDEED see that reaction as being UPTIGHT.

What was really funny to me though?

This whole discussion brought to mind the Slavic dating scene.

Guys actually PAY money PER message back and forth.

And frequently unknown to them they aren’t even corresponding with the REAL girl.

Once guys have paid a whole lot of money messaging with an imaginary person, then they fly over to Ukraine (or wherever) to meet someone who has no idea what correspondence they’ve been carrying on.

How is THAT for putting this innocent North American service into perspective?

So you end up on a ONE HOUR date one night?

Be disappointed and just move on…

But clearly being a modern day Cyrano de Bergerac is still not quite a palatable occupation.

At least not with you girls.

I highly doubt most guys would have a problem though, even if YOU used this method. They would just see this as one more efficient way you were getting the job you’re after done.

They’re goal is to meet you IN PERSON.

Have you give them a REAL CHANCE to get to know you.

They know you want to be lied to.

So if they ever use this service?

What do you think? Is it so terrible that a guy (or girl) would get a little help in trying to make that meetup happen or should they pass and miss the chance to get to know you at all?