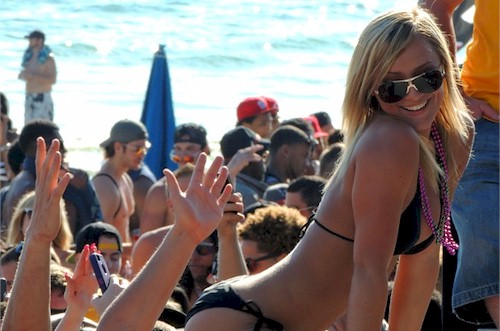 Nobody does more than me to defend you guys against the accusation you’re shallow because you find hot girls attractive.

You know that right?

I’ve tried to get the girls to understand how attraction works.

I’ve shown them that their own baseline attraction isn’t morally superior to yours.

I’ve even recently told them that if they have a problem with you finding other girls attractive, it’s their problem not yours!

So I hope you realize I’m on your side.

But today I’m going to take a bit of a stab at you and get you thinking about your priorities in dating and relationships.

Although attraction works the way it does, that doesn’t mean you should just cast yourself into its hands with abandon.

Because attraction can really bite you in the butt.

That’s why we have the battle of the sexes.

But today I have to level with you guys.

I haven’t been completely helpful to you so far.

I’ve been defending your right to be a guy and have the desires you do, but I haven’t given you sufficient warning about what all this really means.

See here is the thing. You’re naturally attracted to hotties.

It doesn’t matter how intelligent or introverted you are. How successful you are in business. None of that matters. When the rubber meets the road you’re attracted to hotties.

You know the type I mean.

The slim, curvaceous girl who works out to maintain her physique.

She works hard on her make up and dresses in the latest fashion.

She’s the kind of girl who makes your mind sizzle every time you see her walk by.

She really is beautiful and she is exactly the type of girl you’re hoping you can land for a relationship.

If you’re just “out for sex” you really want to land this girl!

But the problem is when a girl is that hot she knows she is.

Guys are drooling over her every 20 seconds.

She can’t walk down the street without every male head within range turning to watch her go.

She is nature’s answer to healthy, child bearing DNA.

The call of the wild is upon you and she feels it.

She’s felt it from a very young age.

But because she’s always known she’s hot, she’s developed a sense of entitlement.

I really shouldn’t have to tell you this, but this is not the girl to bring home to your mother.

Which means she’s not actually the girl to have a relationship with.

Girls worth having a relationship with don’t have this kind of attitude on.

Instead they are unbecoming.

You probably know the type right?

She’s the one who doesn’t turn your head but something inside you tells you she’s worth your time and effort anyway.

She won’t consider you priveleged to be with her, but will actually put you first when she’s with you.

She’s the kind of girl you want to give yourself to, because she’d give herself to you in a heart beat.

In other words, she’s a keeper.

But this kind of girl usually doesn’t meet the qualifications of your baseline attraction programming.

At least not completely.

She’s the type you would probably describe as “at least cute.”

But definitely not hot.

Of course what all us guys dream of, is the girl who is completely hot on the outside, and completely sweet on the inside.

While a few girls I’ve met meet that criteria, sadly most of them do not.

Hey if you are a girl and you qualify on this front, I’d love to meet you!

Yes the haughty girl can turn you on sexually and play to that part of your nature. But all of that excitement fades and makes you want to move on.

The sweet girl keeps you coming back for more of her sweetness.

Because it has substance and value.

But she is usually running camouflage.

Because she has more substance to her personality, she considers outward beauty superficial.

So she often doesn’t really bother to make herself up or dress herself up.

She also doesn’t work out every day.

So she usually isn’t as slim as her hottie counterpart.

Sometimes this sweet kind of girl will go so far as to deliberately try not to put herself out there as attractive, because she believes this will only attract the kind of guy who cares about her looks, and not who she really is as a person.

She is not sexually aggressive.

She displays no haughty traits at all.

Instead she just blends in.

You’re likely to miss her because you’re too busy slathering over that hot girl’s looks.

But let me tell you a secret.

The sweet girl will completely surprise you.

Because the camouflage is exactly that.

Underneath that plain, unbecoming exterior is a little lover waiting to be discovered. She’ll make you so happy to be with her, you’ll wonder what was wrong with you that you obsessed over all those hotties.

Because she’s the real deal, she will give herself to you with abandon.

She won’t be able to wait to be with you again.

She’ll hang on your words and tell you how incredible you are.

She’ll just plain be into you. And you know what? There is nothing more attractive than that!

And another great thing is this kind of girl doesn’t mind that you’re introverted.

That you’re not all confident alpha male.

Because she sees past what her own baseline attraction is calling for too?

She’ll be into you for you.

And that’s what I call a hottie!

What do you think guys? Are you ready to start discovering the real hotties out there?

How To Get Asked Out By A Girl