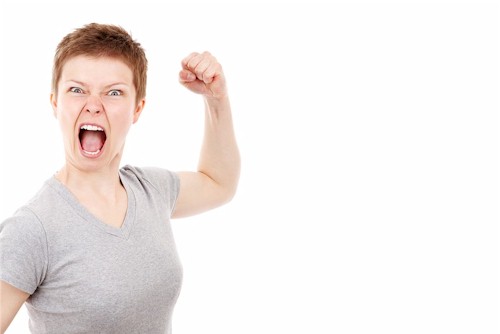 I published one of my (apparently) more controversial blog posts.

The backlash was swift and decisive.

A troupe of feminists showed up in the comment section.

Determined to give me a piece of their minds.

Sadly they didn’t give me their minds at all. What could have turned into a useful dialog, instead turned into nothing but a mindless barrage of negative EMOTIONS.

What were they so uptight about?

I said I believed in a girl’s right to be cat called.

They seem to think I was advocating cat calling ITSELF.

I’ll clarify that misunderstanding this weekend in Part 2 of that mini blog post series.

What I was actually pointing out?

Not every girl thinks cat calling is a problem.

I believe these girls have rights too.

While these feminists think it is unacceptable to CAT CALL a girl, they clearly think it is okay to NAME CALL anyone who disagrees with them.

Since I’m also a believer in the right to free speech?

What they actually nicely display for the world to see?

Exactly how THESE people seek to “argue.”

I messaged a friend about this online attack.

His immediate response was insightful.

Since my conversation with him is actually the best response to this comment barrage, I publish it here in its entirety for your enjoyment!

The central point as you will hopefully note?

If you CAN’T argue your point?

Try to DISCREDIT the person you’re disagreeing with.

Suggest they are intellectually challenged.

Or at least incompetent at best.

Hopefully nobody will notice you don’t have an ACTUAL argument.

HERE’S HOW OUR CHAT WENT:

Him: It seems less important to them to assess your point of view and give reasons why they disagree, and more important to try to use key words to try to belittle you and therefore make your argument seem invalid.

Me: Ayn Rand calls it the Argument From Intimidation.

Me: When you can’t argue your point, question the moral character of your interlocutor.

Him: I was watching a Q&A on YouTube about free speech and so called hate speech. The guy said even though he doesn’t like people saying mean things the freedom to do so is necessary because the alternative is much worse.

Me: Yep. And the only reason the people who want to shut down that kind of speech can do what they do is because they live in a free speech society that lets them do it.

Him: Yes, the real women who just happen to be the extreme feminist types, let’s let them speak for the entire female population.

Me: And completely ignore the voices of the real women I referred to in the blog post who hold to the contrary opinion. But even if no women agreed with me we still shouldn’t restrict the right to do this.

Him: But if they don’t agree with them, then there must be something fundamentally wrong with them, because obviously if they were right in the head they’d agree with their feminist sisters.

Me: Being offended is simply not a sufficient reason to prevent someone’s behavior. And sadly all they are doing is demonstrating to the whole world their complete incapacity to be civil. My way or the highway! I can shout louder than you!

Him: Well presumably they honestly believe themselves to be 100% correct and you to be evil. I can even understand that there are some women that could feel threatened by men calling out to them and so on, but in my mind the final answer is that having the right to do so is far more important than your right to avoid momentary discomfort.

Me: Exactly. And the rest of us aren’t responsible for your personal insecurities. Choice 1: Expect the whole world to change to accommodate me. Choice 2: Learn not to be so easily offended. Hmmm…

Him: What really gets me is it doesn’t seem like you’re making the claim that all women want to be cat called. Simply that a group of women that do like the attention and affirmation of their attractiveness have the right to enjoy that.

Me: Exactly. That’s what Part 2 will point out. I wasn’t actually advocating cat calling at all. Which means what little actual content was contained in their comments was completely beside the point.

Him: And even if they were to try to say your point has no validity whatsoever, anecdotal stories aren’t going to cut it.

Me: Again correct. I’ve already provided anecdotal stories of my own about girls who like cat calling. They need to come up with a reason my group of girls shouldn’t have this right.

Him: Which this group seems to not be so great at, or just don’t care to try. Trying to show you’re right implies that you might possibly be wrong?

Me: Yes they certainly wouldn’t want to actually take a stab at that. That might result in the obvious becoming even more clear.

So there you have it!

What do you think? Did these site visitors of mine address the point of that post in any way at all, or was their sole purpose just to distract you?

Do You Suffer From Monogamy Dyslexia?

Why Am I So Judgmental?