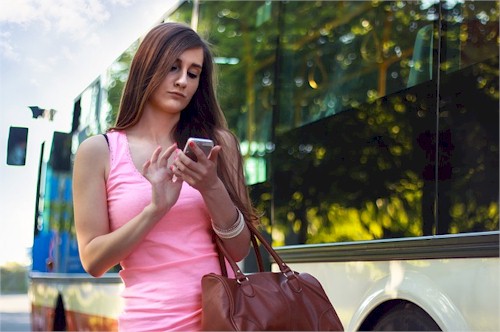 I had an interesting experience the other day.

I was standing waiting for the bus.

You know how those bus lines can be really strange?

Is this person standing in line or not?

Where does the line begin anyway?

Where on earth am I supposed to stand?

The nebulous nature of the bus line became my chosen opener to start talking to the attractive girl who was standing there.

I walked toward her.

She was standing at the “back” of the line.

I looked at her and smiled.

“As we position ourselves in the nebulous line up” I said.

What an opener right?

Be she smiled and agreed with me and we started to chat.

I don’t even remember the contents of that discussion.

The main thing I remember was how easy she was to talk to and how completely natural and enjoyable it was.

Don’t you just love that?

When there’s nothing forced about it?

You just both seem so relaxed?

This was going to be a bit longer ride.

I asked her, “Are you up for some company on the journey?”

She was game so I sat beside her.

We covered lots of subjects and continued to click.

When the ride was approaching its end time though I knew it was now or never. I had to make my move for her number or I would never see her again.

“What do you say we catch a seawall walk sometime soon?”

Then she dropped it.

“But I’d still be open for a walk” she continued.

“Sure why not,” I answered and took her number anyway.

She and I have messaged playfully quite a few times since then and I encouraged her to let me know when she’d be available for our seawall journey.

Nothing has come of this.

Why is the married girl still game to “play?”

As you know from Part 1?

There can be genuine reasons.

Reasons why someone who is married is trapped and cannot escape.

I’m open to the idea they still need love.

So I’ve remained open to at least finding out with her.

She told me that her husband is out of the country for four months right now so obviously that makes things more interesting.

She is definitely anomalous to me though.

Why tell me your married and then continue to proceed?

If you want to play why say you’re married?

Once you’ve said you’re married why are you STILL playing with me?

Don’t worry guys I’m not out of my mind I’m just a student of human romantic behaviors! So far she hasn’t followed up with me even though I’ve attempted a time or two.

As I’ve mentioned before?

I don’t spin my wheels.

I definitely don’t do desperate puppy.

If anything does come of this however?

I will DEFINITELY let you know!

What do you think? Was I out of my mind to proceed at all once she told me that she was married or was her openness to connect anyway a good reason to see where this path would lead?

If You Want To Be Happy Don’t Get Married