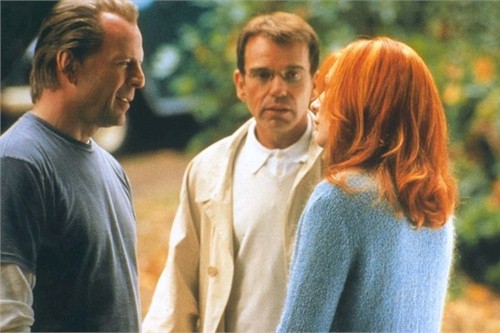 “You know the hardest thing about being smart?”

“I always pretty much know what’s gonna happen next. There’s no suspense.”

He’s speaking to Bruce Willis’ character Joe about their budding career as the “sleep over bandits.” Terry is the brains of the operation and Joe is the brawn.

I have to admit Bandits surprised me.

When I watched it many years ago?

I was completley CLUELESS about relationships.

How little I realized this movie is jam packed with all the themes that have now come to fill so much of my life and my thinking. Everything from Bad Boy seduction to Nice Guys friend zoning, monogamy and romantic friendships too.

What makes this movie so amusingly prophetic?

This one was a very deliberate purchase on my part.

I found it so completely unique back then.

Of course now I know why.

It is writ large with Romantic Love 101!

As you know I believe romantic love is the desire to experience sexual fulfillment and emotional connection that’s mutually shared and enjoyed. Because you value each other, you want to share this between yourselves.

It’s not about “one and only” or “till death do us part.”

Nor  companionship or making a home.

It’s not about raising kids or any of that.

All those things just kill it instead.

Your natural attraction addictions get in the way too.

You girls want to get swept off your feet.

You guys are just “out for sex.”

In Bandits, Cate Blanchett’s character Kate appears front and center to bring all these dynamics into play. Miserable from her long term monogamous marriage she is aching for something new.

She finds this initially in Bad Boy Joe.

He fires all the triggers she’s craving.

He definitely sweeps her off her feet.

All the while Nice Guy Terry is watching them dance.

Only too aware that he never gets the girl.

But as happenstance would have it, Terry and Kate get separated off by themselves in a motel for a two week sojourn. During this time Kate finds herself drawn in by Terry’s intelligent caring sensitivity and calm.

When the group is reunited the battle ensues.

The guys insist Kate has to choose between them.

When she says she won’t?

She swears off BOTH guys.

The night each of the boys tries to get her to run away with him.

At this point the classic quote of the movie wafts softly in your unbelieving ears. She says, “Together you both make the perfect guy. I love you both so why should I choose?”

I’m sure she speaks for most of you girls.

But you know all too well he’s not good for you.

So you try to get by with the Nice Guy.

And he really is loving and caring.

But you get bored to tears after a while.

Over and over you vacilate between these two extremes. Because just like Kate what you’re wanting is both guys. Why should you have to choose?

But of course your monogamous ways say that you must.

Just like Joe and Terry tried to insist Kate should.

You can’t really have both guys can you?

But today many more of you are starting to realize it.

There isn’t any reason you can’t if you want to.

And of course there are more than just Terry and Joe, there is Mike and Mohammad and Jazbeer. There are so many great guys to have in your life, if you could just open up and see this.

A while back I wrote a post called How To Find The Perfect Girl.

As you can see my theme here is the same.

When you open yourself up to Romantic Friendships?

You don’t have to pick and choose or compromise.

You can enjoy each guy for who he is.

Nobody has to be EVERYTHING for you.

You really can love each guy for himself.

Like Kate you just need to realize you DO.

How about you? Are there several guys in your life you really desire a deeper connection with because they each have something unique about them that enriches you?

Sometimes It’s Hard To Contain Myself

Why You’ll Never Find The Guy Of Your Dreams