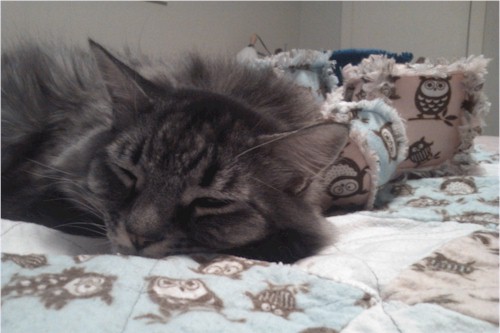 I don’t know if you’re a dog person or a cat person.

Oh that’s not quite true.

If you’re a single girl in Yaletown I know exactly what you are.

Probably just a single girl will do.

I’ve always been more of a cat person.

Not because I particularly love cats.

I grew to resent them late in my long term relationship actually.

All cats seemed to exist for then was to create a litter mess on the floor I had to clean up. And a distraction in the bedroom that became much more interesting than me.

“Lock your pets out of the bedroom.”

He knows too well their REAL purpose.

It’s to kill your feeling of romantic love.

You can’t be feeling connection with your partner.

Not when you’re cuddling up to a furry feline instead.

Be that as it may in my particular life cats played an endlessly enormous role. At our peak we had four of the little critters, each one with its own unique termperament!

Fox was a maincoon and was sanguine to the hilt.

I called him a dog in a cat suit!

His sister Dana was the bitchy one.

Melancholy as she goes!

Then there was Neo who we got for my partner.

But he fell in love with lying in front of my keyboard instead.

What is it about cats?

They always know the person who needs converting!

Neo’s personality was totally laid back.

The final feline female was the feistiest of all. Unlike her X-Files and Matrix compatriots we called her simply Jo. It was sort of a female shortened form for the movie character Joe Black.

And black she was.

But there was nothing dark or unclear about her intentions.

Jo was the driver personality of the team.

The house was hers and she was in charge.

She always had things to do.

She would just check in for a brief moment for a petting.

Then off she’d go again.

Doing whatever it was she did.

Neo often following after her.

So what does all this have to do with what I started out here telling you? That you need to figure out the right goal for your cat?

As you can probably see?

There just was no doing that.

They each had their own clear direction already.

The fact is cats just “do what they do.”

You can spend all your time just enjoying them.

You don’t need to direct them or lead them at all.

Since you can see this about cats?

Why is completely impossible for you to see this about LOVE?

Your relationship is a living thing that exists to be and do what IT does. There isn’t anywhere you need to take it or drive it. Just like your cat it doesn’t exist for any other purpose.

Your relationship is an end in itself.

It’s there for you to enjoy it.

Just for its simply BEING there.

Enjoy your partner too.

Only when you forget that your love is the point?

Then you start trying to figure out what else the whole thing SHOULD be.

If you’re not enjoying your partner anymore?

Why on earth are still with them?

Do yourself a favor and return to the place that you first started. When you first met your partner you were fascinated with everything about them and wanted to be with them just BECAUSE.

Your relationship should be your secret oasis.

Your bubble in a wearying world.

Let it overwhelm you each day.

That is the ONLY reason to be in a relationship.

Because you value your partner and they value you.

What do you think? Are you trying to drive your relationship toward some type of goal when you should just be enjoying it for what it is?

Where The Cowgirls Are

They Thought I Was Crazy…But Then