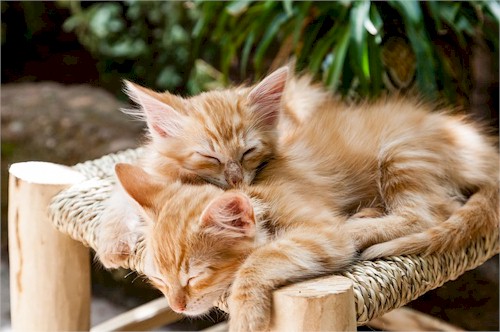 “Our afternoon nap yesterday was quite nice.”

When she wrote this the profound simplicity of what she said really struck me.

Being the quippy guy I can be, my reply to her was, “How do you know? We were asleep lol!”

But I understood what she meant.

Our relationship is zero drama and is filled with times of enjoyment like this where we just “be.”

No getting uptight about why I didn’t do this or why she did that.

And we didn’t even start our relationship the way you’re “supposed to.”

The first time we “officially” went on a date I had asked her what she was doing that night and she told me she was going to a movie.

I asked if I could tag along.

We caught dinner at Earls before the movie and I ordered something with onions in it saying, “Good thing we won’t be kissing tonight.”

She told me later her immediate thought was, “Oh. I guess we won’t be kissing tonight.”

But this was very in keeping with how I look at relationships. I think people move toward being physical way too soon.

I want to get to know a girl before I get physical with her, because for me being physical is being sexual.

Even a kiss is sexual.

Sex for me is an expression of my affection and love for a girl.

It is the pinnacle of our closeness, not its starting point.

I need to know and care for a girl before I move in that direction with her.

After the meal we headed over to the theatre, watched the movie together, then said goodbye for the evening.

And that was it.

Things moved even slower from there.

We spent more time getting to know each other.

We enjoyed other meals and other events out.

We did some movie nights at my place.

All the while we talked and got to know each other and our affection for each other grew.

We didn’t get physical at all for over eight weeks. There was a reason I took this long to proceed in that direction.

I had experienced a virtual breakup with another girl right around the time I started getting to know this girl I’ve been telling you about.

I wanted to make sure I was not just rebounding from that other relationship by getting into this one.

So I took my time.

I told this girl all about that other relationship too.

This girl has known I’m polyamorous from day one. She read my blog within a few days of meeting me.

In fact she became attracted to me in part because I’m so clear here that I’m not “out for sex.”

That meant a lot to her.

It meant she could trust me.

That we wouldn’t be getting physical prematurely.

So we took time to get to know each other and eventually things moved in a physical direction, because we came to truly know and love each other for who we are.

Now we have a romantic friendship like I’ve defined that term.

Easy, as I’ve said before.

But even though we share emotional and physical intimacy together, what she said about this nap experience really emphasizes to me how special she is.

How special what we have is.

Because she is totally right.

While most people would think the highlight of their relationship is the sex or the thrills or the intensity, what we find the most rewarding is the closeness we share.

A nap that is “quite nice.”

It brings a feeling of warmth to me as I think about that experience together.

I had arrived home the night before from Ottawa and was still “functioning” on eastern time.

We were both tired.

So we curled up in each other’s arms that afternoon and the next thing we knew we were waking up still curled up together.

We didn’t say anything about it at the time.

But later the next day she wrote me these simple words in a message.

“Our afternoon nap yesterday was quite nice.”

It brings to mind the lyrics in Faith Hill’s song Breathe.

“All we need is just to be…baby isn’t that the way love’s supposed to be…just breathe.”

Yes. That is the way love is supposed to be.

How simple it can be.

How do you feel about this? Would you like your love to be this simple too?

Love Never Fails You Just Redefine What Success Is (Part 2)

To Please An Addict

You Should Never Move In With Your Lover