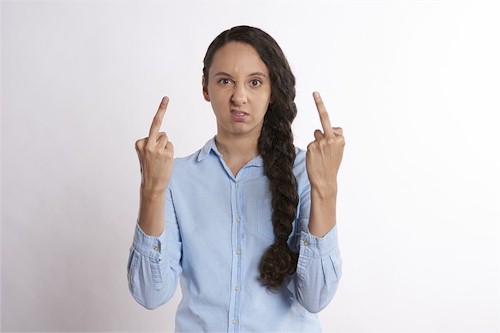 I’ve got a great idea for a new relationship training series.

I’m thinking of calling it How Not To Break Up With Someone.

There is a lot of great coaching out there now about how to find a new relationship.

There is good advice on how to grow your love and nurture your connection together.

But who is teaching you how to break up? From what I can tell there is a definite dearth of skills in this area.

To some extent this is understandable.

When the time comes you feel you must move on, there is a high likelihood you are not in the best of spirits.

But all the more reason for somebody to take you by the hand, and help you maintain the appropriate degree of civility.

I regret to inform you I have some solid experience in this area.

As well as personally breaking up with my long term partner in a congenial fashion, over the past two years I’ve been the recipient of three less than congenial breakups.

Two were full blown relationship breakups, one after a 3 month relationship and the other after a year. The third breakup was a budding relationship that was cut off in its infancy.

Sadly one advantage of being the recipient of breakups, is you’re likely to have seen exactly how NOT to do it.

Because nobody really knows what they’re doing, and frankly nobody is in the emotional state to do it right.

That was definitely the case with the girls who broke up with me.

Below I share my experience with you, as well as some thoughts on how these girls could have done things better.

This girl and I had been experiencing a powerful baseline attraction for each other.

We spent 30 plus hours together over a period of just 10 days, really getting to know each other and our affections were firing on all cylinders.

Our connection grew so quickly it was clear where all this was going.

Then suddenly it happened.

She sent me a text that read simply, “I just wanted to clarify. This relationship. We’re just friends.”

She is one of the three girls who friend zoned me.

I got together with her several times to clarify how she was feeling and to try to get her to reconsider.

But it was a no go situation…

The next breakup was from a 3 month relationship where my partner, with some justification, felt I was pulling away.

Given my avoidant past and the fact she hadn’t known me that long, her fears were understandable.

What was really going on though, is I was new to open relationships.

I had not yet learned how to properly be in a romantic friendship and I was really doing some things wrong.

I’ll talk about my learning curve with all that in future blog posts.

The key point here is she thought I didn’t love her any more and decided it was time to jettison herself from the situation.

And jettison she did!

On a Monday morning she sent me a text telling me she had agreed the Friday before, to begin a relationship with someone else.

For most people that would be enough to be a terrible breakup situation, but since our relationship was open I simply said, “Why wouldn’t we be?”

I had been aware this other guy was interested in her and had encouraged her to explore that connection if she wanted to.

But then she sent a second text that sealed the deal.

“Well you know I’m into monogamy.”

Her real preference was monogamy, but because she really cared for me, she had agreed to be with me in an open relationship anyway.

So essentially she was informing me she had already begun a new relationship, which meant that ours was over.

Without so much as discussing it with me.

And again, she did this over text.

I suspect you’re beginning to see some patterns here yes?

The last breakup took place quite recently, after a year long relationship with someone who meant the world to me.

This was a full blown romantic friendship like I discuss here and it was very nice and enjoyable.

I’ve written about it a couple times here and here.

Given the high quality and longevity of this relationship, this breakup was a complete blindside for me.

It was also the worst breakup of the three, because in addition to not seeing it coming, she even chose not to let me know it was over.

I couldn’t believe it when it happened.

She left my place after a nice overnight visit and as far as I could see she was happy when she left.

We had discussed a few things during that visit which represented some relationship challenges, but nothing I felt was earth shattering or life changing.

Just things that we needed to work through and subjects for further clarification.

Apparently she didn’t see it that way.

When I checked in with her the next day, she told me she was going to be taking in some “me time” over the next week, cancelling events she had planned.

I didn’t think too much of this, because she had been very tired when she left me, due to a long hard work week.

So I let her be and respected her space.

She is a very independent girl and I knew at times she could appear a bit “offish,” but that was just her way.

I admit though my intuitions were firing a bit that something might be wrong.

This was confirmed when I sought to touch base with her again the next day, and her replies were very short.

Hmmm. Not her usual pattern.

I probably should have tried to open up communication at that point, but I still chalked it up to being tired, and respected her space.

Finally at the end of the week, I still had not heard back from her.

When I noticed on social media she had resurfaced, I touched base to see how her energies were.

When she replied “Fantastic!” I knew something was definitely wrong, since though she was feeling great she still had not checked in with me.

You have to understand, our pattern for almost a year had been one of checking in with each other most evenings, sometimes messaging back and forth for over an hour.

We just loved connecting this way until our next in person meet up.

But here she had gone radio silent on me for an entire week, and had not sought to reconnect with me.

She seemed to have no intention of doing so.

When I asked her how she was doing her reply completely floored me.

“Just enjoying me time, which I want to continue doing actually. I no longer wish to be in a relationship of any kind.”

She replied simply, “Didn’t you say most relationships end in a year or so. Well I guess our time has come to an end.”

I said, “Obviously something big going on here that you’re not telling me. Can we get together and talk?”

I asked her whether something had been growing for a long time she hadn’t been sharing with me.

She said, “No I think a lot just hit me on our last visit and then I just used this week to move on.”

So here again I was being informed our relationship was over “after the fact.”

Apparently at our last meet up…though she gave me no impression this was the case at the time.

She even began in her mind the process of “moving on” emotionally, before she even told me it was over.

She appeared to have no intention of letting me know.

Had I not pursued reconnecting with her, I honestly don’t know if I ever would have heard from her.

Of course I am not naive enough to believe the answers I was given truly explain the extreme form this breakup took.

As you can see I tried to open communication lines, to learn what I had done that must have wounded her so deeply.

I was given no opportunity to reach that understanding.

And that’s a big problem with breakups. You’re usually never given an exit interview.

I always try to get one, because I want to understand.

Even if I cannot save a relationship that is ending, I try to find out what caused the breakup, so I can potentially change my behavior in the future.

What I want to do now, is pull together some principles from what I’ve shared.

Hopefully they will help you in the future, if you ever find yourself in the position of feeling you need to move on.

The first principle I would emphasize is respect.

I have said that romantic love is valuing your partner and wanting to share yourself with them as a result.

Even if your relationship ends, your partner has not ceased to be a person of value, the person you originally valued and loved.

Even if they’ve hurt you now, you still owe them respect.

Which means in no uncertain terms, breaking up over text is simply anathema.

You should honor the memory of the positive aspects of your relationship with a true conversation in person.

Texting a breakup is a cop out.

It is you failing to take responsibility for the action you are now taking.

No it is not easy to break up in person.

But it is necessary to prevent dishonoring the love you have shared.

Dishonoring the person you are leaving.

Another principle is if your relationship has been monogamous, you should break off officially from your current relationship, before beginning another.

You may believe your relationship is over, but you owe this to the agreement you made with your partner.

Do I really need to say that you should actually inform your partner you are breaking up with them?

Prior to my most recent breakup, I would not have believed it is necessary to say so.

Imagine the hurt I felt after a year long relationship that both of us affirmed to each other as a wonderful connection, to find out my partner had left me and had no obvious intention to let me know.

If it is dishonoring to your relationship to break up over text instead of in person, obviously not even informing your partner is terrible beyond belief.

But you should do more than just inform you partner things are over.

You should also do them the honor of helping them understand the reasons why you feel you must move on.

Closure is so important in relationships. It’s something I’ve not really received in either of my true relationship breakups, even though I’ve sought it.

I’m so grateful the girl who broke off our budding relationship was willing to meet with me several times, to help me understand.

To help me let go.

The hard thing about not receiving closure is it can nag at you indefinitely.

“Could I have done something differently to prevent our final end?”

Respect your partner enough to give them understanding.

No, they may not change because of what you share with them.

Or at least not now.

But you give them that possibility.

They also may not agree with your assessment of the situation.

Practicing principles of protecting your partner during this conversation is very important too.

But tell them why you’re leaving.

Be a mature adult and take responsibility for your action.

This will not only honor your partner.

It honors you too.

The song says, “Breaking up is hard to do.”

It’s one of the hardest things you’ll ever do.

But do it right all the same.

What do you think? Would you like to see the How Not To Break Up With Someone training course on offer?