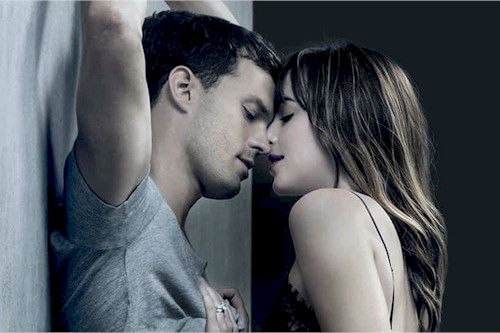 I’m not that big on the final Fifty Shades of Grey movie.

Told a friend and he didn’t go to it as a result.

I’m not sad though that I didn’t like the movie.

Nor that my friend isn’t checking it out.

I’m sad about something else he told me.

The reason I didn’t like the third movie is the reason I was less pleased with the second one. The more the redemptive story progresses? The less invigorating it is.

In movie one Christian Grey is trapped.

Bound by the sadism that grips his soul.

He is truly a dark tortured character.

Wishing he could find release.

And real love for this girl he’s met named Ana.

The sex scenes have a genuine edge driven by his angst.

By movie two he’s starting to change and agreeing to completely swear off all that bondage stuff. He truly loves Ana and he wants to make good on being her boyfriend instead.

The sex scenes still have the bondage element.

But this time driven by Ana’s willingness to play with him.

She’s beginning to experiment with her own submissive side.

To see what part that still might have in their love life.

At this point Christian’s edginess is gone though and things are feeling more and more contrived.

This guy who has lived in bondage to his demons for years?

He is being magically freed by love.

I can tell you this is a complete joke.

By movie three this blanding out is maxing to the extreme.

Vanilla MARRIED bondage at that!

The only real edgy scene is when Christian is mad.

He takes it out on Ana sexually.

No he doesn’t beat her anymore.

He denies her sexually instead.

I know as a Christian I ought to find the series’ whole redemptive theme satisfying but I don’t find it that way at all. Instead I find it very misleading about what sexual addiction is ACTUALLY like.

So is that the thing that has me sad?

Not quite, but it’s getting closer.

It was the reaction of a Catholic priest my friend knows.

When he told this priest what I just said?

This priest’s response wasn’t about this.

He didn’t hear how I felt the movies failed.

All he was worried about was that I went to the movies at all.

His disappointing response was something like, “A Christian shouldn’t be going to Fifty Shades of Grey movies! It is a terrible testimony to people and I would be a bad example if I did.”

This made me sad because if anybody should attend?

It is Christians who care about our culture.

This Fifty Shade of Grey thing is a huge indicator of the state of relationships today.

As a Christian I WANT to be aware of this.

Know what people are thinking and feeling.

Understand where they are coming from.

How else can I hope to connect?

To help people struggling to find their way in this area?

I know part of the reason this priest friend reacted as he did, is he holds to the long term traditional view of the church about the inherent wrongness of sexuality outside marriage. As I told you recently I don’t share those views and believe they are mistaken and unbiblical as well.

I understand the real dynamics involved with it.

What it takes to break away from sexual bondage.

The deep emotional wounds that are there.

The need to be truly healed.

When your sexual addiction wounds are healed? Watching Fifty Shades of Grey will be the least of your worries.

Struggling with sexual addiction yourself?

You don’t have to.

You can be healed too.

Reach out to me and let’s have a convo.

You can be more than Fifty Shades Freed too!

How about you? Time to take a step toward true healing instead of watching fiction that doesn’t have a clue what it’s talking about?

What Happens In Vegas

What Happens In Vegas (Part 2)