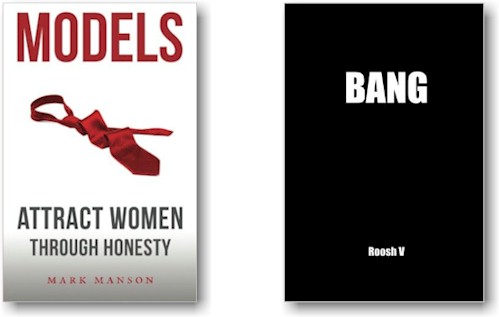 Sometime I’ll share my background on all this, why I got into studying it, and the influence it has played in the evolution of my thought about love and relationships.

The short answer to that question is that nobody has studied how attraction works as thoroughly as these boys have.

But today I want to pick up (no pun intended) on an interesting trend I’m seeing among the PUAs as they age a bit and become more interested in the world of actual relationships, as opposed to one night stands.

As they transition into wanting more stable and meaningful relationships, they are beginning to expand their ideas of what it means to have a real girl (or girls) in their lives.

Both these guys have gone through some fascinating transitions on their path to self discovery.

I have often called Manson the “pickup artist who found his heart.”

In his book Models, he encourages you guys to realize that girls are people, not just opportunities to “get laid.”

He encourages you to care about the girls you have sex with and seek to connect with them emotionally, not just physically.

I wouldn’t quite say he’s recommending Romantic Friendships like I advocate, but he’s very close, and I think his book is a definite step in the right direction.

Valizadeh, known in the seduction community simply as Roosh, is a more interesting study because of the extremes he’s traveled through, and the extremes through which he has expressed himself while doing so.

The series title teaches guys basic seduction theory, then each of the subsequent titles records his adaptation of this theory to the various cultural contexts he found himself in as he traveled the world, seeking to have one night stands in every country he visited.

Roosh is well known and respected in the seduction community, while also being recognized as one of its more “colorful” proponents.

I consider him one of the most philosophically minded PUAs, though most people don’t really understand him.

He chooses to present his viewpoints in such literarily extreme and often crass ways to drive home his point, that many people fail to really hear him.

Nowhere is this extremity more evident than in his infamous How To Stop Rape article that led feminists in Ontario and Quebec to attempt to have him legally banned from speaking in Canada, believing in this article he actually advocates the legalization of rape.

I don’t have time here to expound in detail why this is a complete misreading of that article, but since Roosh’s overall program of being “out for sex” represents much that modern feminism despises, I understand how the extreme illustration he chose to use in that article to make his actual point, resulted in the backlash he received.

He has since gone on to write an entire book about his experience in Canada called Free Speech Isn’t Free and it is well worth the read to see how far we’ve gone in seeking to police people’s thoughts.

What is interesting to me about Roosh for my purposes today though, is the transitions I’ve seen him go through with reference to relationships.

Yes he has advocated one night stands across the planet. But as he has done so, a clear change in his perspective has developed over time.

The first note I made of it was on his forum, when he once told a young guy who hoped getting good with girls would make him happy, that this would never happen.

Roosh told him, “If you are not happy already, ‘getting laid’ isn’t going to make you happy.”

There were a lot of other indicators as I read things he wrote and said over time, that made me so convinced he was changing, that I finally wrote him one day and asked him, “You sound like a guy who really wishes monogamy would work. Am I right?”

History has born this out.

He has recently entered a monogamous relationship with a girl, and his site Return Of Kings (no longer online) began publishing more and more articles on how to find a “good girl” to marry, so you can beat the trend in the west toward divorce.

So like Manson, Roosh is another PUA who appears to have “found his heart!”

If this was where our story ended we might just think we have a happy ending brewing. But now we hit a somewhat odd twist to our tale.

Both Manson and Roosh have recently published articles questioning the validity of romantic love in relationships.

Manson compares John Lennon’s claim that “all you need is love,” to Trent Reznor’s Nine Inch Nails song Love Is Not Enough and insists one of these two guys must be wrong.

He points to the obvious narcissism present in Lennon’s life and concludes that love is indeed suspect.

You can be in love with someone without having the compatibility necessary to live with them for the long run. Loving someone doesn’t solve the other relationship problems you face. When you love someone you can end up losing yourself for them.

None of this is a good thing.

Manson doesn’t come right out and say you don’t need love at all. But he comes very close.

Roosh echoes these fears, though as always with a more philosophical flare. And he comes out more definitely against romantic love as a basis for relationship.

He points out that romantic love is a changeable, emotional, childish notion that can hardly be the foundation of a reliable long term union. He says romanticism is something that was invented in the 18th century to undermine and replace tradition and theistic authority, in the name of individualism.

He has a point.

I will eventually be publishing a post showing that long term monogamy and marriage had nothing to do with romantic love throughout its quite variable history.

As Roosh indicates, it is only in the last 200 years that anyone thought romantic love should be its basis.

But the great anomoly here is that two pickup artists who began being only “out for sex,” found their way to their hearts, only to now question the very heart basis for relationship.

My how the mighty are fallen!

As you know I think romantic love is our purpose.

As such you would probably think I disagree with these two pickup artists in their current assessment.

But actually I agree with them.

I do not think romantic love will guarantee a long term monogamous relationship. There are too many statistics that make it clear that it won’t.

Roosh feels this means you should abandon the desire for romantic love altogether and instead pursue relationship and monogomous marriage on the basis of companionship.

Finding a compatible companion to spend life with is more important than being in love.

He has much of history on his side with this one too.

It is much easier to stay together if you like each other and aren’t simply in love.

As Roosh says “Believing that romantic love and passion are necessary in a marriage makes it that much easier to exit out of it…exactly what modern girls are doing in droves.”

Again he is quite correct.

But is he correct in thinking girls will be happy with the absence of romantic love in their lives?

That they will stay in a loveless marriage solely for the sake of companionship?

I’m not so sure on that count.

Unless he can convince you girls to return to economic disempowerment and convince lawmakers to eliminate no fault divorce laws so you can again be trapped in these loveless marriages, I don’t think his recommended approach is going to fly.

If he gets a girl to agree to this initially, he still faces a high likelihood of divorce nonetheless

Girls want to be loved. Not just kept.

He encourages a movement toward friendship as the basis of relationship.

Friends don’t just like each other. They don’t abuse each other either.

How long would you stay friends with someone who abused you?

If you answered “Not long,” then why do you stay in a romantic relationship where this kind of abuse is the case?

As you know I think friendship is the proper foundation for romantic love.

So to this degree I concur with Manson, and with Roosh to the extend Roosh means friendship when he refers to companionship.

But I don’t agree that friendship alone is enough.

What Manson and Roosh are critiquing is not true romantic love. Much of what passes these days as “being in love” is really just baseline attraction.

That two pickup artists would confuse attraction for love, is almost to be expected, when their whole history is the study of how attraction works.

When it does, your relationship hits the rocks if this is all it is based on.

So these PUAs are right about that.

Real romantic love is about attachment, not just attraction. It is about coming to value your partner for who he or she is and wanting to share yourself with them as a result.

Every romantic relationship must move from attraction to attachment, if it is going to last for the long haul.

But romantic attachment is not “just friends” either.

Unless there is a true desire for both sexual fulfillment and emotional connection, you don’t have real romantic love.

This is the problem with long term monogamy and marriage.

When the focus becomes everything but romantic love, it is impossible to sustain the relationship.

This is a primary reason monogamous relationships fail. They are about everything else but your romantic connection.

I don’t recommend traditional long term monogamy because it puts the focus in the wrong place.

With Romantic Friendships, whether monogamous or polyamorous, you are better able to enjoy the newness and richness of your connection every day.

By not cohabiting and blending your lives together like traditional monogamy does, you prevent the demise of your love by all the other things that would normally get in its way.

They have gone through a lot of change in their lives as they have sought to grow into the guys they are today.

My hope for them and for everyone they influence, is that they will take the lessons they’ve learned as inspiration to build romantic love in their lives, and not give up on it in the name of just “making marriage work.”

Love is what gives life its meaning.

What it needs is your focus, not your neglect.

What do you think? Are you ready to write a better page in your diary?

How To Be The Coolest Girl In His Life (Part 3)

Yes Girls Everything Is About Sex

She Really Is A Cutie!