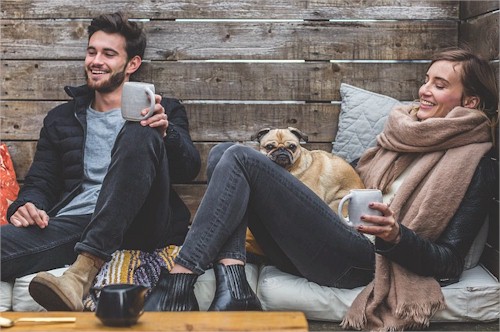 I was out for coffee with a friend the other day and we got talking about relationships.

He knows I do relationship consulting and as is often the case he was curious about my own love life.

I don’t spend a lot of time talking about specifics here, because I respect the privacy of my partners.

But because I present a somewhat unconventional way to configure your love life, it’s natural that people at times become curious.

In this case I had mentioned something about my current partner and my friend asked me, “You use the word ‘partner’ rather than ‘girlfriend.’ Is this person really just a ‘friend with benefits?”

A year or so ago a business associate of mine used the same terminology, when I described the way I approach my love life.

But as I understand the term “friends with benefits,” I don’t see Romantic Friendships to be anything like that at all.

The term “friends with benefits” is normally used to refer to an arrangement where two people get together for recreational sex, but there is no romantic connection between them.

Although they are called “friends,” usually they don’t really do anything else together than just meet up for sex.

Because it is an ongoing relationship for this purpose, as opposed to just a one night stand, it is referred to as a “friendship.”

Yes in rare cases “friends with benefits” do have a friendship that is more extensive than just having sex together.

But even then it is the lack of a romantic component that distinguishes it from what I mean by Romantic Friendships.

In fact, if you were to take a look “from the inside” of what I’m referring to by the term “Romantic Friendships,” you’d be pretty hard pressed to distinguish it from what you usually think of as a romantic relationship and being “a couple.”

One obvious distinction is in its purest form, a romantic friendship is non-monoagamous.

There is no requirement to commit to being exclusively with your partner.

But it is also completely optional, whether or not you actually have more than one romantic friendship at any given time.

The main point is that there is an ongoing openness to experiencing romantic love with whoever you experience it with.

There is also a form of romantic friendship known as “living apart together,” that more monogamously minded people sometimes choose.

I’ve mentioned these many times.

Things like seeing the purpose of your relationship to be that your partner “complete you,” or that you “personally grow,” or solely because you find each other attractive.

Or “tacking” anything onto your relationship that’s not essential to romantic love.

Instead, a romantic friendship is a relationship where you make your romantic connection the sole reason for being together.

This connection is the relationship’s focus.

You are in the relationship because you desire to experience sexual fulfillment and emotional connection that is mutually shared and enjoyed, because you value your partner for who they are and they value you the same way too.

I’ve often said about the online dating world, there is a humorous contrast for me between OK Cupid and Match.com, when I think about how I configure my love life.

On the one hand OK Cupid is very “polyamory friendly,” and lot of people who identify that way publish profiles on the site, clearly looking for other “poly” people.

But I find most polyamory people should really be called “poly sexual,” because their focus is primarily on having sex with multiple partners, rather than on experiencing romantic love.

Girls on Match are often seeking to find their “one and only” and hoping for an exclusive “commitment.”

Although I’m polyamorous, I’m not seeking sex with multiple partners.

I’m not really seeking multiple partners per se either.

I’m just open to romantic love with anyone I experience that kind of connection with.

But what I really want is love, not just sex.

So although I’m not monogamous and won’t give that kind of “commitment,” I still don’t seem to quite fit in with the poly crowd on OK Cupid.

I actually feel much more comfortable on Match.com. Because there the girls seem more interested in a real romantic connection.

One where emotional connection is just as important as sexual fulfillment, and where the latter is not desired unless the former is present.

That’s exactly what I want, when I’m in a relationship.

But alas, most (if not all) of the Match.com girls are hardcore monogamy girls.

One time a friend asked me why I was even on Match.com, since I’m so definitively polyamorous.

But what I’ve described above is why.

Except for the fact I don’t do exclusive monogamy and am not looking for all the “extras” people sabatage their love with, I’m a pretty traditional lover.

As the girls who open up to having a relationship with me can testify.

So no, Romantic Friendships are not just “friends with benefits.”

Not lite on romantic love at all.

Just lite on all the other non-essentials.

So now that you know the difference, do you think you might give Romantic Friendships a try?

He Really Gets It