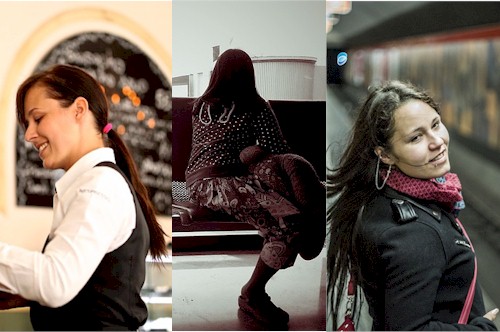 You introverted guys aren’t just sure what to expect if you ever get the nerve up to approach a girl.

Will she bite your head off?

Will she completely ignore you?

Or will she be glad you took the time to say hello?

The answer is…all of these!

Sorry to disappoint you.

I don’t have a formula that guarantees every girl you meet will fall all over you excitedly. That’s just not how the real world works.

But it doesn’t work the way YOU think it does either.

Where NO girl finds you attractive.

Where they ALL wish you would tie some weights around your neck.

Go jump off a bridge.

The real world is messier than that.

And sometimes in your favor.

I thought I would tell you about three of my more recent approaches, so you get an idea how this really plays out.

The first girl I met while having dinner out with a buddy of mine.

He was here visiting from Australia so we went somewhere nice.

A cute little slavic gal served us and she had a really nice energy.

I got talking to her asking where she was from.

Then I asked her, “Do you ever do seawall walks?”

We were downtown on Davie St. in Vancouver at the time.

When she said yes I pulled out my phone and said, “Here. Put in your name and number for me and I’ll message you sometime soon.”

She did and that was that.

How did that one turn out?

We had our seawall walk the other day!

The second girl I met when I was making my way back from California.

I had a brief layover in LAX.

They had started to board the plane when I got back to the gate.

I noticed her sitting in a seat and not making any moves to get in line.

I said, “Not one for joining the herd are you?”

She smiled and agreed she’s not.

I asked, “Vancouver home or are you traveling?”

She told me she was just coming to check it out.

As we walked on the plane she said, “I’m Liz.” We traded numbers and I told her I’d message her and show her around a bit when she got settled into her hotel.

I messaged her and she checked back in.

But we weren’t finally able to coordinate times.

Sometimes that’s just how it goes…

So you’re probably thinking, “Not bad Kel! Two out of two were interested.”

I was feeling pretty good when I got off that plane.

I was sitting on the Skytrain with my luggage in front of me when a cute girl showed up. I moved my luggage so she could grab the seat beside me, smiling as she did.

After a minute or two I tried to strike up a conversation.

I don’t remember what I said.

Just picked something from the environment to comment on.

She said ABSOLUTELY NOTHING.

Which was really odd.

I normally don’t get that.

I thought maybe she just hadn’t heard me, so I tried again with something else. Again nothing.

Not even an acknowledgement.

Vancouver is very multicultural so I thought, “Maybe she just doesn’t speak English.”

But then she got on the phone with a friend and proved that explanation wrong.

She literally was JUST TUNING ME OUT.

Like I was some kind of CREEP trying to hit on her.

It was the most bizarre experience I’ve ever had with ANY approach so far.

Because I just don’t experience things this way.

I had made room for her to sit down and wasn’t acting creepy at all.

I really wish I had gotten up the desire to push.

Interview her about her non-responsiveness.

I felt like saying, “Hey. It’s pretty clear you’re completely tuning me out and I find that really fascinating. What’s going on in your mind that you’re feeling a need to zone me out like this?”

Those of you who know me know I’d be very comfortable doing that.

No idea if she would have replied even then.

But it would have been fun to see.

Unfortunately I just didn’t have the energy to go for it that day.

So I left things there.

What’s the moral of the story here guys?

EVERY girl is different.

It doesn’t matter how many times you do this.

With how many girls.

It will NEVER go the same way twice.

Sometimes you’ll get a number and you’ll end up spending time together.

Sometimes it won’t work out.

And sometimes you’ll experience some version or other of that “resting bitch face” phenomenon and just have to shake it off you.

Remember what I said about how to know if a girl is attracted to you or not?

You just APPROACH HER and find out.

You’re NOT trying to get her interested in you.

You’re just trying to see IF SHE IS.

If she isn’t well that’s her loss!

If she won’t even give you the time of day to find that out, what else can you do to help her?

Meet the next girl.

The one who will realize how great you really are!

What do you think guys? Ready to just push through that discomfort and start finding out who will be taken by your charms?

I’m Not Sure I Believe In Checklists Anymore (Part 3)

Sometimes The Answer Is Staring You Right In The Face

Want Love? Here’s The Worst Thing You Can Do To Get It